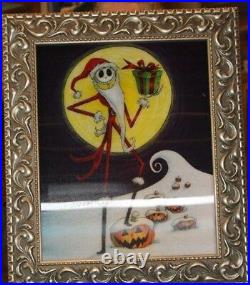 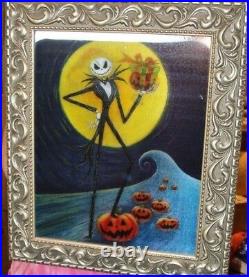 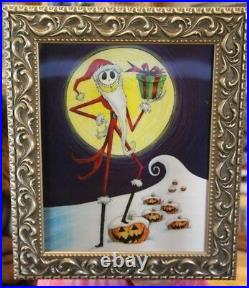 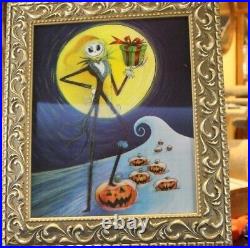 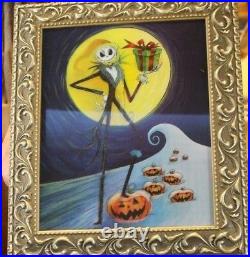 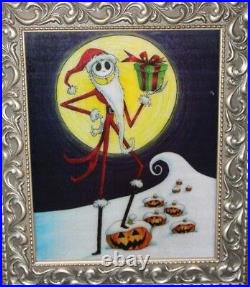 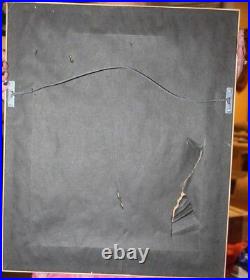 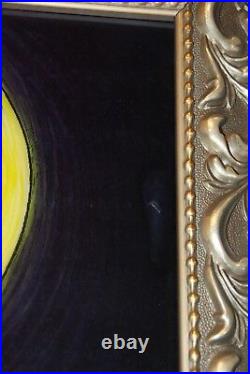 I have heard that the original artwork was created by Disney artist Tim Wollweber, but I cannot guarantee it. This Jack Lenticular measures 20" x 18" framed. It was inspired by the changing portraits in the hallway of the Haunted Mansion in Disneyland. This lenticular portrait creates the illusion of magic as it transforms from season to season.

It goes from Jack Skellington in his typical Halloween outfit and transforms into Santa Jack in his colorful Sandy Claws outfit with snow covered hill! Comes beautifully framed by Disney. This is the authentic one made by Disney for the Haunted Mansion Holiday. When you look at the pictures, the whiteish horizontal stripes are from my bad photography not the picture.

It is very difficult to take a good picture of lenticular artwork when you are inside and there are lights around you reflecting on the surface. Use the good photos as your main comparison please. The frame is in good shape--I see no cracks, dents, or obvious signs of wear. The lenticular itself is in fantastic shape, but does have one light mark in the upper-right corner.

The mark can only be detected at an angle with some effort (see second-to-last photo). This could possibly be wiped off with a little moisture on a cloth, but I did not want to do anything that could change the picture. There are a couple of tears in the paper on the back, I think those happened when we move 3 years ago. These can be easily replaced by getting some backing paper from a crafts store similar to Michaels. We are a non-smoking household.

Cat, if pictured, not included. The farther away from Southern California you are, the longer it may take for your item to arrive.

The general idea behind it is that there is a cost to the space these packages take up on a truck, rather than the physical weight of the package. If the calculated Dimensional Weight of your package is higher than the physical weight of a package, you are required to pay the higher of the two. We are a non-smoking home. The item "Jack Skellington (Santa Jack) Lenticular Framed Haunted Mansion Holiday Picture" is in sale since Friday, April 12, 2019. This item is in the category "Collectibles\Disneyana\Contemporary (1968-Now)\Animation Art, Cels".

The seller is "sellin_stuff_cheap" and is located in Anaheim, California. This item can be shipped to United States.